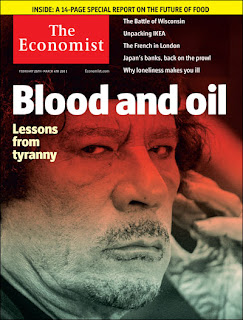 Among the newsweekly, The Economist is the one that the global elite read. Newsweek has been sold by The Washington Post Company and we are not certain if Tina Brown will be able to turn it around. In the shrinking market of the weekly news magazines, The Economist is doing much better than its competitors.

The Economist stands out among the newsweeklies in terms of its global reach. Each issue has coverage on the world this week, the United States, Europe, Asia, and Africa. While Time and Newsweek tend to focus more on U.S. news, The Economist told you something about Uganda’s election, the French in London, the Swedish company Ikea, and gambling in Singapore in last week’s issue.

With the information overload, it is good to have a magazine that provides a snapshot of what is happening in the world. The Economist’s reporting is short and to the point.

I also like The Economist because China features quite prominently in its coverage. Last year, when Xi Jinping became the designated successor of Chinese President Hu Jintao, The Economist had a detailed report of who this rising star is.

The Economist is a British journal and has its own biases. But it provides a lens for me to look at China from a different angle. For example, we know China has overtaken Japan as the world’s second largest economy. But exactly how large is this? The Economist matches the Chinese provinces with countries in terms of GDP, population, and exports. I didn’t know that Guangdong’s GDP is almost equivalent to Indonesia’s. The output of Beijing is as big as the Philippines and Shanghai's output is equivalent to Finland's.

I am also impressed by the occasional special reports, which provide in depth coverage on a certain topic. When I taught a course on liberation theology last semester, I was able to use the special report on Latin America.

In the current issue the Special Report on the future of food asks whether we will have enough food to feed the world’s 9 billion people in 2050. I learned that currently the world produces more than enough to go around. The major reason for famines is not shortage of basic foods, but other factors such as wages, distribution, wastes, and politics. To be able to feed the increasing population, one of the key areas to consider is how to balance the production of crop for food and for biofuels. The United States, the European Union, and Japan all want biofuels to supply 10% of energy demand for transport by 2020.

As an economic and business magazine, The Economist has the interests of corporation and private enterprise in mind. Yet its ideological stance is much less conservative than the Wall Street Journal’s. It chastises the European countries for not speaking more powerfully in support of Arab democracy. The EU is accused of being preoccupied with stability in the Middle East and migrants not landing on their shores, than siding with democracy for the Arabs.

As I watched the news from major American media outlets about the uprising in North Africa and the Middle East, the focus has been what this would mean for the USA. The Economist at least provides a wider angle to look at the world.
Posted by Kwok Pui Lan at 1:42 PM
Email ThisBlogThis!Share to TwitterShare to FacebookShare to Pinterest
Labels: China, food, media, Middle East, news, The Economist
Newer Post Older Post Home