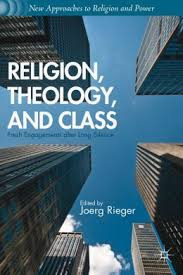 Religion, Theology, and Class: Fresh Engagements after Long Silence edited by Jeorg Rieger has just been published by Palgrave Macmillan. The book wants to re-emphasize class as a critical category in theology and ethics, because people tend to focus more on gender, race, and sexuality issues in North America. Divided into three parts, the book presents new definitions of class, situates religion and class in the context of early Christianity and the United States, and examines the relation between class, poverty, gender and race.


Gary J. Dorrien, Stephanie Mitchem, Santiago H. Slabodsky, Susan B. Thistlethwaite, and I reviewed the book at the annual meeting of the American Academy of Religion on November 24, 2013 at Baltimore, Maryland. My review used a postcolonial perspective to examine the contribution of the book.


Postcolonial theorists have criticized the limits of the concept of class in classical Marxist theory, based as it was on the development of industrialized and capitalist societies. It is less useful to study pre-industrialized societies and other forms of oppression in society. They have also pointed out the Orientalist biases in Marxist writings.


In this book, the contributors seek to bring the concept of class up to date in the context of global capitalism. The nuanced and pluralistic approach is most helpful and it points to the difficulties of formulating a generally accepted theory of class. Less is said in the book, however, about the vision or shape of an alternative global economic system and the role religion and theology will take part in it.


While the poor are often mentioned, they are discussed in the context of Marxist or other theories. The Occupy Movement is mentioned in several chapters and offered as a clear example of people rising against the transnational capitalist class. In addition, Vítor Westhelle speaks briefly about the transgression and resistance of migrant people, while Pamela K. Brubaker refers to the factory workers in Mexico, who struggle to live out according to the values of sustenance economy in relation to transnational production. Toward the end of her chapter, Brubaker also mentions Vandana Shiva’s work on sustenance economy and nature’s economy to contest the dominant market economy.


Corey D. B. Walker’s chapter presents a sustained reflection on class from a subaltern perspective by offering an account of “thinking blackness” in the work of black religious scholars and theologians. He challenges us to work for “a categorical infusion of an/other logic the opens up onto new and that in/forms novel conceptual intelligibility as well as the orientation of human life.” Walker finds Walter Mignolo’s concept of “colonial difference” and Anibal Quijano’s concept of “coloniality of power” valuable for his project.


Edward P. Antonio’s important essay on “Black Theology and Postcolonial Discourse” in the Cambridge Companion to Black Theology has brought to my attention the often unexplored overlapping concerns of black and postcolonial theologies and possibilities for mutual learning.


I would like to see the following areas articulated in future discussion about religion, theology, and class. Postcolonial theorists discuss the intimate relationship between the colonizers and the colonized, such as mutual inscription, collaboration, attraction, and repulsion. The book often presents stark contrast between the rich and the poor and toward the end, Rieger says that dualism is necessary to articulate the realities of class struggle. But class in today’s global capitalism must be seen as more fluid and multifaceted, and indeed in relational terms.


While the exploitation by the transnational capitalist elites should be criticized, we need to investigate the role of the poor and the middle class in collaborating with or sustaining the global economic system. This is not to blame the victims, but to see how global capitalism interpellates different kinds of subjects through its ideologies and practices. Without articulating how and why the poor are absorbed, coopted, and bought into the system and become the instrument of their own oppression, we cannot see through the maze to propose alternatives and mobilize resistance.


I hope that gender and sexuality will feature more prominently in future discussion of religion, theology, and class. Except for Brubaker’s chapter, other chapters have either left these categories out or mentioned them only in passing. The work of Marcella Althaus-Reid has convincingly shown the intersection between heterosexism and colonialism and empire building. We need to investigate for example how gender is racialized and has a class dimension, how race is genderized, and inflected by class, and how class intersects with race and gender especially in the consumerist culture.


Finally, I would like to see contributions from China, Vietnam, and Eastern Europe as their move from Communism to adopting capitalist measures will offer another perspective to look at how religion and theology is inflected by class and economic injustice in these rapidly changing societies.  I hope the publication of the book and this panel will stimulate further interdisciplinary research and conversation.