Is HuffPost Selling Out? 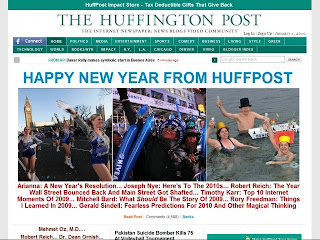 I was shocked yesterday to hear that Arianna Huffington has sold the Huffington Post to AOL for $315 million.

The HuffPost was founded by Huffington and Kenny Lerer in May 2005. Beginning with a shoestring budget, Arianna will pocket about $100 million from the deal.

Arianna wrote that she became addicted to the blogosphere in 2002, on the heels of the Trent Lott/Thurmond story. She noted that blogging has rapidly transformed the media culture in America. Citizens are empowered to create news, and they are no longer passive consumers.

With 25 million visitors each month, the HuffPost is one of the first Internet newspapers to fully integrate with social networks, such as FaceBook and Twitter.


I am a frequent visitor to the HuffPost because it started out as a progressive blog. The site features many left-wing commentators, critical of President Bush's policies. Many academics also write for HuffPost, providing information and detailed analyses of current issues. My colleague Patrick S. Cheng is a regular blogger for the Religion page.

But over time, I have noticed that the HuffPost has branched out to cover more topics: health, divorce, books, arts, education, sports, etc. As Arianna said yesterday, only 15 percent of her site's traffic is for politics (that is down from 50 percent a couple of years ago). Politics is just one of the two dozen sections.

Indeed, the site is more interesting than something like Politico. I read the blogs "The First Lady's Dress," and "What Makes a Man Attractive" in the last two days because the latter includes a gorgeous photo of George Clooney.

The site has become a hot commodity because it has created a community. But has it been sold to corporate interests? Will it lose its progressive edge in order to have a broader appeal? I have noticed many popular posts on the sidebar featuring scantily-clothed stars.

Many people are deeply concerned about the deal. Arianna's blog announcing the deal has 221,000 pageviews and more than 7,400 comments.

Many progressives want to see news media that would counter-balance the conservative talk shows and FOX News. It is too early to tell if the visitors will go somewhere else.

Many have criticized the site for not paying its writers. Now that Arianna has cut such a shrewd deal, will her bloggers continue to write without pay?

Arianna, at 60, has reinvented herself so many times. Some one said, she is "the most upwardly mobile Greek since Icarus," while others admire her ability to always chasing the next big thing.

It is amazing to see her ability to use so many platforms to get her message out. Arianna is a phenomenon that is worth paying attention to.