Today is Chinese New Year, the beginning of the Year of the Rabbit. My sister in Hong Kong sent me a greeting card, showing the plum branches they bought for the new year. The Chinese characters say, "May your wishes come true and may you have luck and harmony."

As a Christian, I celebrate three different new year days. The Christian calendar begins with the season of Advent. I spent the first week of Advent last year in Victoria, British Columbia, and preached at Christ Church Cathedral. We began the new year preparing for the birth of Christ. 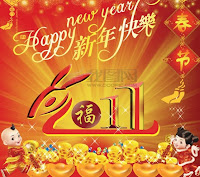 The New Year of the Gregorian calendar begins on January 1. This is the day of circumcision of Jesus (the eighth day of his birth) and the baby was given the name Jesus.
The Chinese New Year was a big day for my family when we lived in Hong Kong. My sisters and brothers all returned home on New Year's Eve for the big banquet. It was a time for family reunion. The Chinese New Year is about family, relationships, and food.
New year is a time of renewal and fresh start. In many ancient religious traditions, there is the myth of eternal return.
There is a group of psalms called enthronement psalms, such as Ps 47, 93, and 96. These psalms emphasize Yahweh as the king.
Clap your hands, all you peoples;
shout to God with loud songs of joy.
For the Lord, the Most High, is awesome,
a great king over all the earth. (Ps 47: 1-2)
Some have suggested that these psalms were likely used during Israel's New Year's Festival, which celebrated Yahweh's kingship and rule and God's covenant with Israel. The all-powerful God is king of the universe.
The belief that God rules over the universe is under much attack today. Stephen Hawking has said, "Let there be no God!," and there was light! He also proudly proclaimed, "Science makes God unnecessary."
Yet his Cambridge colleague Stephen Toulmin reminds us that traditional world picture combined "an astronomical, a teleological, and a theological picture" and stressed "cosmic interrelatedness."

Toulmin's teacher Ludwig Wittgenstein, said in Culture and Value, "An honest religious thinker is like a tightrope walker. He almost looks as though he were walking on nothing but air. His support is the slenderest imaginable. And yet it really is possible to walk on it."
Indeed, "the opposite of faith is not doubt, it's certainty," writes Anne Lamott.
Posted by Kwok Pui Lan at 10:51 AM
Email ThisBlogThis!Share to TwitterShare to FacebookShare to Pinterest
Labels: China, Chinese mother, new year, psalms
Newer Post Older Post Home