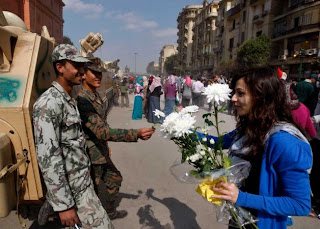 What happened at Tahrir Square in the past two weeks reminded me of Tiananmen Square in 1989.

After 18 days of peaceful demonstration, the people of Egypt forced President Hosni Mubarak to resign. The exhilarating people at the Tahrir Square chanted, “The people made the regime step down.”

The protesters cleaned the Square to prepare for the birth of a new Egypt. A woman offered white chrysanthemum flowers to the soldiers.

After ruling Egypt with a strong hand for 30 years, Mubarak left Cairo last Friday and handed the control of the country to the military. As the Vice President announced this transition, car horns honked and the people sang their national anthem and waved their flags.

The outcome of the Tiananmen demonstration was drastically different. A lasting image was a young Chinese man standing alone to block a line of tanks from moving closer to Tiananmen.

The Chinese presses were careful and guarded in reporting Egypt’s regime change. It has been reported that China attempted to prevent the dissemination of information of the Egyptian protests over the Internet.

After Mubarak’s resignation, the Chinese government released a statement saying China hopes stability and order would soon be restored in Egypt and urges foreigners not to interfere with Egypt’s internal affairs.

Many Chinese commentators believe that the kind of mass demonstration in Egypt will not happen in China anytime soon.

In 1952 a military coup d’état by a group of young military officers overthrew the monarchy of King Farouk. Since then Egypt has been under of the rule of strong men—Nasser, Sadat, and Mubarak. Egypt experienced two different ideologies in its development: increasing Westernization and capitalist market economy or Islamization under fundamentalist religious groups.

Even though Mubarak had been re-elected, his government was criticized because of economic decline, unemployment, and increased influences of Islamic fundamentalism.

China began its economic reform and liberalization policies since 1980. Deng Xiaoping led China toward a socialist market economy. Today, China is the world’s second largest economy and the country has become much more pluralistic. Young people have many outlets for their energy. Although the gap between the rich and the poor is huge, it would be difficult for people of different sectors to come together to launch a mass protest such as the one in Egypt.

The road to democracy is long and tortuous. The Egyptians have lighted the fire of democracy in Yemen and other countries in the Middle East. I hope Egypt will not soon turn into a military dictatorship and a free presidential election will occur in a timely fashion.
Posted by Kwok Pui Lan at 9:11 PM
Email ThisBlogThis!Share to TwitterShare to FacebookShare to Pinterest
Labels: China, democracy, economy, Egypt, protest, Tiananmen
Newer Post Older Post Home