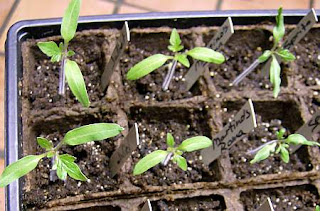 On this Earth Day I am planting hope.

I am going to put the seeds that I have saved from last year’s cheery tomato plant into the soil. I went to Home Depot to get a cherry tomato seedling last year. The tomato plant yielded many juicy and yummy cheery tomatoes in the summer and into the fall. They were so good that I decided to save some seeds to see if I could grow them next spring.

I read in a Chinese newspaper that I can save tomato seeds in two ways. I can save some cheery tomatoes and freeze them in the freezer. I saved two and yesterday I defrosted one of them so that I would still have one left, just in case.

The other way is to take out some seeds from a tomato and dry them, so that they will be ready to be planted in the following season. I will experiment to see if seeds preserved by both methods would germinate.

I first tried to grow vegetables in the spring of 1996, after my family moved into a house we bought in Massachusetts. I have grown up in Hong Kong and there was hardly any land for growing.

So in 1996, we started a garden plot of 3 feet by 12 feet in our backyard and grew tomatoes, lettuce, green peppers, green onions, and beans. I also grew a few basils and thymes, herbs I did not use often but gave very fragrant smell.

The tomatoes and lettuce were so fresh when we used them for our summer salads. The most amazing thing was watching the little seedlings grow and bear fruits. Gardening was something I have never tried before and it opened a new world for my family and me.

After growing for several seasons, my family stopped doing it because we were too busy and the summer months were hot. I had many other things to do in the summer: reading, writing, taking walks, and catching up with my life…whatever that was.

Last June, I taught a June course on God and Creation. Our class went on a field trip to see an organic garden at a monastery, about 45 miles north of Boston. A student of mine was in charge of this organic garden and he explained to us the relation between sustainable farming, food, and God’s providence in very concrete ways. For example, he showed how different plants grow symbiotically together in his garden.

After the June term, it was already late for the planting season. But my husband and I decided to start growing again!

We created a new garden plot of 5 feet by 22 feet. We divided it into 6 beds and grew tomatoes, red and green peppers, zucchini, and butternut squash. I was so glad to be able to grow Chinese bok choy from seeds I bought from Chinatown. Though I had only 8 or 9 not very healthy-looking bok choy plants, hardly enough for two meals, I bragged about my success in the fall.

So this year, I am observing the international Earth Day by doing something simple: plant some tomato seeds. This is a concrete way of bringing awareness to my busy life of the intimate connection I have with the environment.

As I watch the tomato seeds germinate and grow, I will learn not to take the foods I eat for granted. I thank all those who have grown the foods I will eat on this particular day and remember those who have very little to eat or have to go to bed hungry.
Posted by Kwok Pui Lan at 11:32 AM
Email ThisBlogThis!Share to TwitterShare to FacebookShare to Pinterest
Labels: Earth Day, environment, food, growing, lettuce, pepper, planting, tomato

Asian Americans Should Care about Immigration 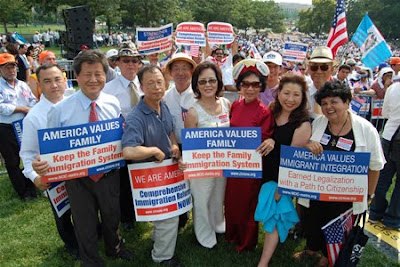 The public faces of undocumented people in the U.S. are people from central and South America. The Latino group has been leading the effort to demand a path to citizenship and to challenge legislation that would discriminate undocumented immigrants.

Where are the Asian faces? Among the 12 million undocumented people in the U.S., about 1.5 million are Asians. They have come from different Asian countries. Many don’t speak English and work in jobs that others don’t want.

At the annual meeting of Pacific, Asian, North American Asian Women in Theology and Ministry (PANAAWTM) held in Norcross, Georgia, from March 24 to 26, 2011, participants discussed the theme “Immigration, Borders, and Boundaries.”

Anne Joh, a professor at the Garrett-Evangelical Theological Seminary set the context by discussing border and boundaries in globalization and the neo-liberal economy. She pointed out scholars such as Michael Hardt and Antonio Negri have argued that contemporary Empire is increasingly de-territorialized, with capital and labor moving across national boundaries. Yet, Joh said, walls have been constructed to keep people out and to maintain national boundaries, such as the walls in Israel and along the U.S. border.

Among the Asian undocumented immigrants, lesbian, gay, bisexual, transgender, and queer people face double marginalization. Elizabeth Leung of the Pacific School of Religion talked about the invisibility of Asian LGBTQ people and the difficulties for them to come out to their community. Since they are undocumented, they cannot access supportive systems and ask for help when they are in need. Leung reminded us that there are more than 2,100 verses in the Bible about caring for the poor. The aliens are included in the category of the poor, and we should be concerned about their welfare.

Helen Kim Ho, a Korean American lawyer who left her practice of corporate law to become the Executive Director of the Asian American Legal Advocacy Center, Inc., challenged the participants to be involved in immigration issues. As a person of faith, she said churches and faith communities have very important roles to play to stand up for the voiceless and to shape the values of society.

Ho said Asian Americans should not remain silent on immigration issues. As a group Asian and Pacific Islanders were the first to be stigmatized in the nation’s immigration law. In 1882, the Chinese Exclusion Act, signed by President Chester A. Arthur, effectively stopped Chinese immigration for ten years and prohibited Chinese to become U.S. citizens. It was the first major law restricting immigration to the U.S.

The Chinese Exclusion Act foreshadowed the other acts restricting immigration in the 1920s. In 1929 the National Origins Act capped overall immigration to the U.S. at 150,000 per year and barred Asian immigration.

It was not until the Immigration Act of 1965 that the national-origin policy was eliminated. Since then more and more Asians immigrated to the U.S. to join their families and to work in various professions. Today, Asian Americans make up 4.6 percent of the population (about 14.6 million people). We are one of the fastest growing racial/ethnic groups (in terms of percentage increase) in the U.S.

Yet speak we must. These undocumented workers work hard, pay their taxes, and contribute to our society. The Bible teaches us to care for those aliens and strangers among us. In a parable in Matthew 25, Jesus said that whatever you did for the least of these, you did it to me. Let us heed the call and stand in solidarity with those who are voiceless and afraid to speak.