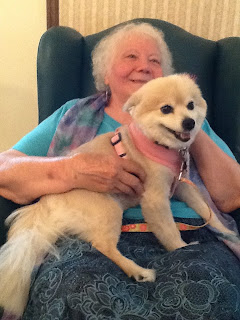 Bev Harrison sat on a comfortable Queen Anne chair with her dog Pom Pom sitting on her lap. Wearing a light blue T-shirt and a dark blue skirt with floral design, she looked great and energetic, greeting and talking to people who have come from near and afar to celebrate her 80th birthday.

I have come to pay tribute to this pioneering Christian social ethicist. But more than that, I have come to say thank you to a friend and mentor. In 1989 I came back to the U.S. to defend my dissertation in May and was looking for a place to stay till my commencement in early June. Bev was so kind to allow my daughter and I to stay in her apartment at Union Theological Seminary.


Bev’s huge apartment had bookshelves full of books in social ethics, sexuality, and moral philosophy. It was great to have access to a library while you were a guest. I read Randy Shilts’s And the Band Played On and other works on AIDS and sexual ethics at her apartment. I also followed intensely what was happening at Tiananmen Square by watching TV coverage in her living room.


Bev is a rare public intellectual who pays equal attention to sexuality and economic justice. Many social ethicists focus on one of these topics, but not both. Bev has written on procreative choice, reproductive rights, and misogyny. I have read many works by Reinhold and H. Richard Niebuhr before I knew Bev and I always admire her astute analyses about these American ethicists. She has expanded social and economic theory to make sure that women’s equality and rights are protected.


Her most well known essay “The Power of Anger in the Work of Love” was mentioned frequently at the birthday party. She writes, anger is “a sign of some resistance in ourselves to the moral quality of the social relations in which we are immersed.” Furthermore, she says, “where feeling is evaded, where anger is hidden or goes unattended, masking itself, there the power of love, the power to act, to deepen relation, atrophies and dies.”*


Kudos to Bev. The essay must have liberated many middle-class women from their coerced gentility, passivity, and faked femininity. Several students of hers, both women and men, told stories that they had come to Union to study with her after reading this essay. 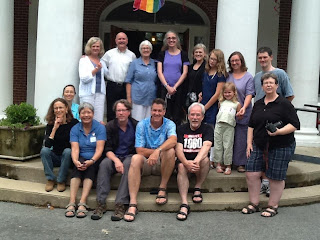 More than ten former students came to Brevard, North Carolina, to celebrate her birthday, from Marvin Ellison, her first doctoral student (graduated in 1981) to the last one Rebecca Todd Peters (graduated in 2001). For more than three decades, Bev has mentored students both at Union and at other schools, as they tried to develop their own voices as scholars. The discourse on social ethics in America would be much diminished without the contributions of Pamela Brubaker, Daniel Spencer, Elizabeth Bounds, Mary Hobgood, Marilyn Legge, and Cynthia Moe-Lobeda, just to name a few.


As Bev’s students and friends, we have all enjoyed Bev’s hospitality and cooking. Since Bev has moved into assistance living, she invited those attending her birthday party to take away her books, jewelry, pottery, and other household items.


I became sentimental when I visited the house she used to live after she moved into the retirement community that she and her friends have built. It has a large living room surrounded by windows on three sides. The beautiful blue and brown pottery she has collected was on the tables. Her students and I reminisced that we had dined and wined using these utensils in her home in New York.


It was very generous for Bev to give away her belongings so that we can have a piece from her home to remember our friendship. I took a small brown vase home, with gratitude.


On the morning when we left, she brought pictures of her friends and relatives. There was one sent by Dan Spencer when his children were teenagers in 2001. Another picture showed the teenagers have grown into adults. This is typical of Bev. She treasures her friends and students and maintains long relationship with them.


Bev needs to use a walker to help with her balance. Carter Heyward, her longtime companion, takes good care of her and arranges for the birthday party with friends living in the community. I was so surprised to see Carter taking up the fiddle after retirement and playing music with a group during Bev’s birthday party.