The Emergent Church Movement in the UK 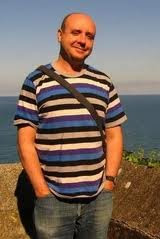 Mobsby has over 20 years’ experience of working with various emerging and fresh expressions of church and lectures internationally on these topics. He serves on the core team of the Archbishop of Canterbury’s Fresh Expressions team.

In his book Emerging and Fresh Expressions of the Church, Mobsby examines the postmodern and high tech consumerist culture and describes the development of a new mysticism as a form of spirituality for what he calls a “post-religion” culture.

Church membership and attendance in the Church of England have been falling sharply. Fifty years ago, over half of the population in England would go to church. A report on “Churchgoing in United Kingdom," published in 2007, shows that about 15% go to church at least once a month.

The search for new forms of church is urgent. Mobsby wants to move away from the established church model, or the church of the Christendom, to church models that emphasize the mystical and sacramental dimensions.

Mobsby and Steven Croft coedited the book Fresh Expressions in the Sacramental Tradition in the “Ancient Faith, Future Mission” Series. It includes an essay by Paige Blair, an alumna of the Episcopal Divinity School, on U2charist.

Mobsby contributes an essay on the new monasticism, which he describes as an outward facing, missional movement. It has the path of withdrawal, retreat, and sanctuary as well as a path of journey, presence, and engagement. This new monastic movement has the following characteristics:

· Simplicity in a context of complexity. People living in these communities keep minimal possessions and maintain a spiritual rhythm of life. Owning and spending less means they do less harm to the environment.
· Sacramental understanding of time. The binary division of the sacred and secular is challenged. There is a new appreciation of what Barry Taylor has called the sacralization of culture. The Moot Community develops a rhythm of life which consists of six elements: presence, acceptance, creativity, balance, accountability, and hospitality.
· Prayer. Contemplative prayers and daily prayers are seen as source and inspiration.
· Mission. Premodern friars provide care for the sick and the poor. Modern monastics engage in missions to serve the economic poor and spiritually impoverished.
· Love for the Earth. Monastics view all life as holy and live close to the earth.

Some people in the UK have criticized the emergent and new expressions movement. Some question whether the movement has sufficiently differentiated what is “in culture and not of culture.” Others are not sure how the new expressions are related to the old.

In the U.S. the emergent church is predominantly white. I am eager to learn more about this movement in the UK and to see how it has combined the missional and the spiritual to serve the poor and revitalize the old church.
Posted by Kwok Pui Lan at 10:42 AM
Email ThisBlogThis!Share to TwitterShare to FacebookShare to Pinterest
Labels: Church of England, emerging church, Ian Mobsby, mission, monasticism
Newer Post Older Post Home