Religion, Gender, and Sexuality in Africa

In May, I attended a conference on Religion, Gender, and Sexuality in Africa sponsored by the School of Religion, Philosophy, and Classics at the University of KwaZulu-Natal in Pietermaritzburg, South Africa. I was invited to deliver the opening keynote address on theology, gender, and sexuality from a postcolonial perspective.


This was the first time that I had the opportunity to discuss gender and sexuality outside the North Atlantic context and I have gained a lot of insights from the experience. I am very grateful to the organizing team Professors Lilian Siwila and Charlene van der Walt and Dr. Federico Settler for their hospitality during the conference. I hope to continue to learn from my African colleagues.


South Africa is close to my heart. The first rally I participated in the US during the time when I was a graduate student in the 1980s was to protest against the apartheid government in South Africa. In a travel seminar to South Africa several years ago, I had the opportunities to visit churches, seminaries, and social agencies working for women’s rights and HIV/AIDS issues. ﻿﻿﻿﻿﻿﻿
Professor Cheryl Anderson of Garrett-Evangelical Theological Seminary was also a speaker and she delivered a stimulating keynote address on “Intersecting Identities: Exploring Race/Gender/Sexuality Constructs in the United States Today and Their Theological Implications.” Other keynote presenters addressed the issues of “disabled sexuality,” gender and sexuality in the Philippines, and African women’s biblical hermenetics today. In addition, more than 50 papers were presented in the concurrent sessions, with presenters from South Africa and other African countries.﻿﻿﻿﻿﻿﻿
Although I have participated in discussion on gender and sexuality in denominational gatherings, academic institutions, and professional guilds in Asia and the US, the scope of the South African conference was most comprehensive! The papers touched on biblical interpretation, masculinity, public health, queer theology and practice, language and liturgy, ethnography, HIV/AIDS, mass media, and digital humanities. 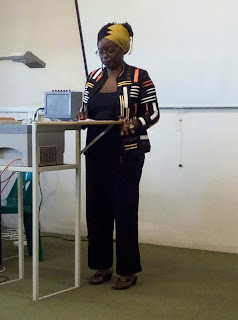 It was delightful to meet Professor Sylvia Tamale from Uganda at the conference. She was the first female Dean of Law in Uganda and the editor of African Sexualities: A Reader. When I asked her why she took on the massive job and editing a volume of 670 pages, she said that she was tired of hearing what Westerners and outsiders have to say about sexualities in Africa. The media tends to portray African sexualities in sensational and biased ways to reinforce the colonial construct that Africa is a “dark continent.” For example, the media widely reported that Uganda passed an Anti-Homosexuality Act in 2013. But the Constitutional Court of Uganda ruled the Act invalid in 2014.


As an Anglican, I am particularly interested in the debates on human sexuality in the African churches and societies. The Episcopal Church in the US took a progressive stance on LGBTQ issues. In 2003 the first openly gay bishop Gene Robinson was consecrated in New Hampshire. Later, the Church resolved that the call to ministry is open to all, including transgendered persons. In 2015, the Church decided that the rite of marriage is available to all people, regardless of gender. These practices have been looked at with scorn by some African bishops, who even declared that there are no LGBTQ people in Africa!

At the conference in Pietermaritzburg, LGBTQ issues were fully included in the discussion. A particular highlight was the discussion of the politics of race, sexuality, and nation-building. Participants discussed whether the labels LGBTQ were suitable in African societies and whether there are indigenous terms. Others discussed alternative forms of sexual practices in Africa and queer Christian voices in charismatic churches. Professor Melanie Judge has published Blackwashing Homophobia: Violence and the Politics of Sexuality, Gender and Race. She examines the intersections of race, gender, sexuality, and class identities and the politics of violence in a postcolonial context. 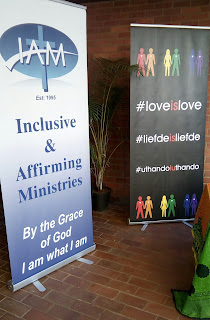 We watched a documentary prepared by the “Destabilizing Heteronormativity Project,” in which civic and religious leaders talked about their work educating and supporting people to challenge heteronormativity and cisnormativity. The conference included NGO partners, such as the Gay and Lesbian Network, Inclusive and Affirming Ministries, Global Interfaith LGBTQ Network, and Queers without Borders.


Since I was so stimulated by the conference, I hope a similar conference can be organized for academics, activists, and NGO partners in Asia. Questions of sex tourism, prostitution, LGBTQ rights, gender-based violence, HIV/AIDS have long been important issues in Asian feminist theology.


I returned from the conference with renewed commitment to explore further the intersection of gender, sexuality and religion from postcolonial perspectives. Future research issues and some of the resources include: constitutional rights, human rights, and sexuality (Grace Y. Kao, Grounding Human Rights in a Pluralist World); psychic and national trauma and gender-based violence (Nigel C. Gibson and Roberto Beneduce, Frantz Fanon, Psychiatry, and Politics), African churches, homosexuality, and US Christian Right (Kapya Kaoma, Globalizing the Culture Wars); and African postcolonial thought (Achille Mbembe, On the Postcolony and Critique of Black Reason; and Emmanuel Chukwudi Eze, ed., Postcolonial African Philosophy: A Critical Reader).