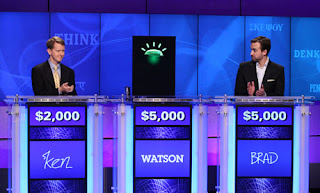 In January 1998 I wrote an article entitled, “What If God’s Name Is 01100100?” I was trying to imagine what God would look like in a digital age. What kind of metaphors would we use to describe God? I asked, Would we talk about God’s omnipotence in terms of gigabytes?

Oh boy, gigabytes? How much have I underestimated the power of God!

Watson was created by a team of 25 IBM scientists over four years. It has 10 racks of IBM’s new parallel POWER7 processors, with a capacity equivalent to 6,000 high-end home computers.

One of the answer in Jeopardy was “Kathleen Kenyon’s excavation of this city mentioned in Joshua showed that the walls had been repaired 17 times.”

Watson correctly asked the question, “What is Jericho?” (The whole Bible has been installed in Watson).

Since the computer Deep Blue we have never been so enthralled by the competition between human beings and machine. In the famous contest in May 1997, Deep Blue beat the chess grandmaster Garry Kasparov.

While Deep Blue could anticipate millions of positions of the chess game in seconds, Watson’s ability to understand human language represents a gigantic step forward in artificial intelligence. Paul McDougall writes, “Watson simultaneously runs natural language processing, information retrieval, knowledge representation and reasoning algorithms to fathom the intent of questions and yield what it thinks is the best answer—all in a matter of seconds or less.”

What are the implications for advances in artificial intelligence for theology?

In her book In Our Image: Artificial Intelligence and the Human Spirit, Noreen L. Hersfeld writes, “The potentiality of the computer to mimic human thought has opened the door for a new era of self-imaging.”

The abilities of Watson to recognize human language and process complex thought raise the question of what is truly human. What do we see as important in human nature that we want to create robots and cyborgs that can function like us and hope to image in artificial intelligence? How would this tell us about our relationship to other humans and to machines?

In a wider context, what will be the contributions of cognitive sciences to theology? In Minding God: Theology and the Cognitive Sciences, Gregory R. Peterson asks, “What does the Silicon Valley have to do with Jerusalem?” He says that theology has not entered into much dialogue with cognitive sciences. But since cognitive sciences have revolutionized the ways we think about the mind, human nature, and our position in the world, they have much to offer to theology.

More religion scholars have shown interest in the cognitive sciences. At last year's annual meeting of the American Academy of Religion, the theme of the plenary sessions was on Religion and Science, with particular attention to new research on the brain/mind.