I began to conceive the book Postcolonial Politics and Theology: Unraveling Empire for the Global World during the 2019 Hong Kong protests, the global Black Lives Matter movement, and the COVID pandemic. I asked what a postcolonial theologian had to say in a time like ours. I gathered pieces of my writing in the last decade or so to discern if there was a pattern of thought that would be useful for our time. For me, writing is a witness to history—my personal history as well as the history of the world around me.

At the annual meeting of the American Academy of Religion in Denver, Colorado, in November, there was a panel devoted to my book. I am very grateful to Traci C. West, Miguel De La Torre, Nami Kim, and Melinda A. McGrarrah-Sharp for their remarks and questions. I have learned so much from each of them through the years and treasure their friendship and critical engagement with my work. 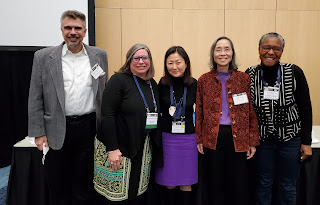 As I look back on my work in the past decade, I notice several changes. I have engaged decolonial thought more intentionally than before. This is partly due to my dialogue with colleagues in Brazil and South Africa, who are developing decolonial religious thought in their contexts. As a result, I have read beyond Spivak and Bhabha and learned more about postcolonial history, economics, and political sciences.

When I started to learn about postcolonial theory in the mid-1990s, China had begun its reform and liberalization. Today, China has become the world’s second-largest economy and China-U.S competition has a worldwide impact. Postcolonial studies needs to scrutinize the so-called “peaceful rise” of China and the ways many countries have been forced to ally with one superpower or the other.

I have also learned from practical theologians, and so the book includes discussion on practices: protest, teaching, preaching, peacebuilding, and planetary mission. Postcolonial theology needs to incarnate in the churches and the wider community if it is to make difference, and not remains an academic exercise.

Gayatri Chakravorty Spivak talked about “sanctioned ignorance,” when she critiqued the biased white episteme and curriculum. But nowadays, I understand “sanctioned ignorance” to mean also the ignorance of racial and ethnic minority groups about each other’s history and resistance movements. Each group would focus on its own struggles against the white-dominant world and knowledge system, without making connections with other minorities or oppressed groups.

Several panelists raised the question of how to teach to promote the decolonization of theological education. One of the ways I have tried is to promote global awareness because many American students tend to place U.S. history and politics at the center. When we discuss racism in the U.S., we need to connect this with the historical context of colonialism and global racism.

As teachers, we have to resist participating in the disciplining and domesticating of students’ minds. What do we count as theory? Do students need to learn Derrida, Foucault, Agamben, Butler, etc. to be theoretically proficient? When supervising doctoral students, what kind of theoretical frameworks do we want them to follow or develop? Can they find jobs if they don’t cite these known figures?

It is not that these theorists are not helpful. But if we continue to privilege “western” theory, where is our creative edge? Why do we assume that the reality of the majority of the world will be illuminated by scholars whose interests and preoccupations come from different contexts? In other words, do we repeat the mistake of seeing “western” scholarship as universal, which can be applied context-free?

De La Torre has counted that there were fifty-three sessions at the annual meeting related to colonialism or postcolonialism. He raised the concern whether this mainstreaming of postcolonial studies in the academy would lead to its losing its subversive or activist edge. He noted that when liberation theology began to gain traction in the academy, it lost its close connection with social movements for change.

I have also noticed that in recent years, there has been increasing engagement with decolonial or postcolonial theory by religion scholars of different traditions. In last year’s annual meeting, there was a session with a lively discussion on decolonizing the teaching of religious studies. Given the long history of colonial influences on the study of religion, I welcome this self-critical scrutiny of the ways we teach and study. The transformation of the field will hopefully lead to more organic knowledge of the religious practices of the oppressed and not just the elites.

While working on the book, I became keenly aware that we need more work on political theology from the Asia Pacific. With Lester Ruiz, I co-convened a group of Asian and Asian American scholars from many different countries to discuss this topic for about three years. We are going to publish a book based on our Zoom conversations that are transpacific, interdisciplinary, and interreligious. Political theology will not be the same if we shift our gaze from the Atlantic to the Pacific, which is long overdue.

(Adapted from a presentation at the annual meeting of the American Academy of Religion on November 19, 2022)