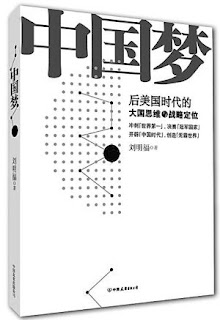 Nationalism runs very deep in China today. On Chinese web sites, many Chinese bloggers and commentators rush to defend China whenever China is criticized, especially by Western media. A strong China dream has the danger of romanticizing the nation, the people, or the state. It can lead to blind trust and uncritical support of the nation. When this happens, China dream could become nightmare for other countries and peoples.
Posted by Kwok Pui Lan at 8:49 PM
Email ThisBlogThis!Share to TwitterShare to FacebookShare to Pinterest
Labels: China, military, peaceful rise, sport, USA
Newer Posts Older Posts Home
Subscribe to: Posts (Atom)