Poetry and the In-between Space

What happens when theologians meet with poets? Several faculty of the Boston Theological Institute found this a very rewarding experience. Professor Mark S. Burrows of the Andover Newton Theological School was the instigator of the group.

The first poet we met was Robert Cording, author of Walking with Ruskin and a professor of English and Creative Writing at the College of Holy Cross.
Just now,
overlapping,
the sound of water
against rock, against rock
and, diminuendo
with less plock, against driftwood. . .
I instantly connect with his poetry--so Haiku-like, so Chinese.
The images jump from the pages. His words so sparse.
As an epigraph to one poem, he cites Wang Wei. It was Wang Wei , an eighth-century Chinese poet, who famously said that there is painting in poetry, and poetry in painting.
Poetry has a special place in Chinese culture. The Chinese word for poetry shi means "the language of the heart." No private or social occasion was considered complete in the old days without a few chosen words in rhyme to mark it. 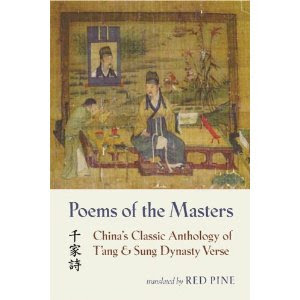 Unlike in the West, Chinese women have had a long tradition of writing poetry. Many of these have been preserved and published. The most famous one is Li Qingzhao of the Song Dynasty.
The ground is covered with yellow flowers
Faded and fallen in showers
Who will pick them up now?
Sitting alone at the window, how
Could I but quicken
As the language of the heart, poetry allows the Chinese to express the subtleties of realities and the shades of emotions. The best poetry infuses the scenery with emotions.
Poetry inverts grammar, reverses syntax, and separates lines in awkward places. We don't call this "poetic licence" for nothing. As a result, poetry is often hard to understand.
But for Cording, poetry opens an in-between space, and in-betweenness is the condition of our humanness. "We live between our birth and death, about which we can know almost nothing," he writes.
In a traditional Tang poem of 4 lines and each with only 5 characters, you cannot say much. But much can be said. A whole universe can be painted. What is not said is often as important as what is said.
It is between the lines, in the in-between spaces, that the readers are invited to re-create with the poet, to imagine, and to roam freely.
Posted by Kwok Pui Lan at 8:29 AM
Email ThisBlogThis!Share to TwitterShare to FacebookShare to Pinterest
Labels: China, poetry
Newer Post Older Post Home