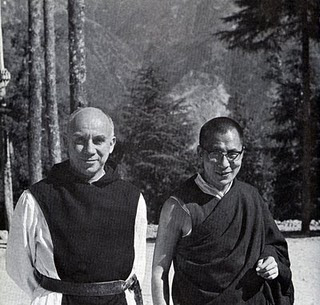 The Dalai Lama met the Trappist monk Thomas Merton at his exiled home at Dharamsala in India in November of 1968. The Dalai Lama was 33 and Merton was 20 years his senior.

The two men had a sense of humor when they met. The Dalai Lama wondered why the Western monk was wearing a pair of tall brownish boots, which seemed out of place in India. He noticed the white robe and a broad leather belt Merton wore. The Dalai Lama was wearing his maroon robes with a patch of golden yellow on his vest.

“Merton was a robust man, both in the physical sense—he had a bodily frame with big bones—and in the spiritual sense,” recalled the Dalai Lama some 40 years after the encounter

Merton was so curious of the Dalai Lama’s abode and study. He noted the Tibetan block-print texts in oblong sheets, the rows of little bowls of water, a tanka, and marigolds growing in old tin cans. The artificial flowers in a Coke bottle amused him.

Merton was on his trip to Bangkok to meet with abbots of Catholic monastic orders and to attend an interfaith meeting. He took the opportunity to visit India and met with the Dalai Lama for three times at Dharamsala in India, where the Dalai Lama was in exile since 1959.

Merton wrote in his journal: “The Dalai Lama is most impressive as a person. He is strong and alert, bigger than I expected (for some reason I thought he would be small). A very solid, energetic, generous, and warm person, very capable of trying to handle enormous problems.”

I had similar impressions about the Dalai Lama, when I saw him in 1991, when he and his Tibetan monks came to speak in New York for the International Year of Tibet. I still have the seeds the Dalai Lama gave out at the end to remind us to take care of the earth and build a new world.

The Dalai Lama and Merton discovered they had many things in common. Merton’s day began at 2.30 a.m., while the Dalai Lama’s begins at 3.30 a.m. Both spent many hours in the morning in contemplative prayer and silence.

No one would expect that Merton would die just weeks after the visit of an accidental electric shock in Thailand. The Dalai Lama mourned his death, saying, “the world lost a truly spiritual man…I lost a friend.”

I was very moved by the accounts these two spiritual leaders wrote about their encounter. I tried to imagine the emotions that the Dalai Lama had when he stood inside Merton’s cell in Gethsemani Abbey in Kentucky some 20 years after their brief encounter.

The Dalai Lama recalls Merton’s visit in the beginning of his book Toward a True Kinship of Faiths. He urges us to leave our comfort zone and be open to the spiritual treasures of humankind. The journey will deepen our own spiritual practices. He writes, “Thomas Merton opened my eyes to the richness and depth of the Christian faith.”
Posted by Kwok Pui Lan at 6:55 PM
Email ThisBlogThis!Share to TwitterShare to FacebookShare to Pinterest
Labels: Buddhism, Dalai Lama, Thomas Merton, Tibet
Newer Post Older Post Home