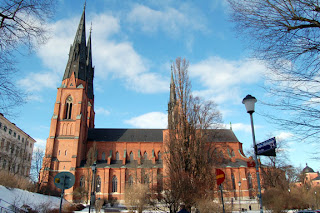 The taxi driver drives a Saab. I saw the little ring about the aphabet A. So I have arrived in Sweden.

The ride from Stockholm airport to Uppsala took about half an hour, and everywhere was covered in snow. The whole country has been frozen since November, and the snow will not melt till May.

The Uppsala University is the oldest university in northern Europe, established in 1477. The Faculty of Theology was established since the beginning. Currently it has 14 faculty members and about 1,500 students, including majors and other students taking courses.

Even though it is called Theology, the Faculty of Theology also offers courses in religious studies. My host Professor Kajsa Ahlstrand teaches World Christianity and Interreligious Studies. She is a friend of my colleague Christopher Duraisingh and visits India often.

About 80% of Swedes belong to the Church of Sweden. The Uppsala Cathedral is a red brick huge building with twin towers. The Dean of the Cathedral is a woman. Out of the 14 bishops, 3 are female, including a lesbian, the Bishop of Stockholm.

Gay and lesbian couples can be married in the Church of Sweden, though some conservative bishops allow only a blessing after the civil marriage.

I asked Kajsa whether there is a schism over the issue of homosexuality within the Lutheran World Federation, just as that in the Anglican Communion. She said the polity of the LWF is quite different. First, the Lutheran church has not been an instrument of colonialization to the extent of the Anglican Church. Germany had a few colonies, but was not a huge empire, like those of the British and the French. Second, there is no equivalent of the Archbishop of Canterbury, and the Lutherans are more polycentric. Third, the LWF still has a lot of money and the African churches benefit from the fundings and do not want to separate from it.

In the afternoon I went to see the Cathedral. It has many side chapels and one devoted to Brigitta, the patron of Sweden and Europe. There is also a relatively new sculptor of Mary the mother of Jesus, as an adult woman dressed ina peasant long blue skirt. We often see Mary the young virgin. I was delighted to see Mary of my age. She looks human.

Archbishop Nathan Soderblom was buried in the Cathedral. Soderblom was a professor at Uppsala from 1901-1914 before he went on to become a bishop and archbishop. He was a churchman and a historian of religion. He was ahead of his time for insisting that students in theology should learn about other religious traditions.

I found out my book Chinese Women and Christianity, 1860-1927 is used as a textbook for undergraduates. It is quite expensive and does not have an eye-catching title. Yet, the students have quite good reviews of it.

This is my third time to Sweden. The first time was in Lund, where I delivered a lecture on Ecology and Christology almost 15 years ago. I was so surprised at the time to find so many Volvos on the road because Volvos are expensive cars. At Uppsala I saw Ford, Toyota, and other European cars. But the Volvos are very durable and they are still running after 25 years. I guess if you have half of the year icy and snowy, you really need a good reliable car.

Tonight, I am going to have dinner with Kajsa and two of her friends from Oslo who flew here to hear my lecture tomorrow. My lecture better be good.
Posted by Kwok Pui Lan at 9:01 AM
Email ThisBlogThis!Share to TwitterShare to FacebookShare to Pinterest
Labels: Christianity, church, Sweden, Uppsala
Newer Post Older Post Home