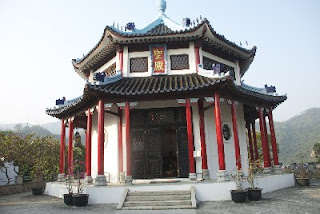 On Tao Fong Shan, Hong Kong, is a beautiful Chinese Christian center and chapel. The work has been supported by Swedish and Norwegian missons.

There is an article on Folke in the Swedish Missological Themes in 2010 written by a Norwegian scholar Ole Bjorn Rongen.

Folke came to China in 1887 after the abortive earlier missionary efforts in the 1840s and 1850s. He stayed in China till 1904 and worked to establish mission stations in Shanxi, Shaaxi, and Henan, poor provinces in the heart of China. After his return to Sweden, he occupied leadership positions in the Swedish Mission Council.

Just as the English James Legge (1815-1897) and the German Richard Wilhelm (1873-1930), Folke became missionary-cum-Sinologist. He translated Daodejing, Zhuangzi, and excerpts of Confucian classics into Swedish. He was the first one to have done so.

Unfortunately Folke's work as a sinologist was soon forgotten, as he was overshadowed by the Norwegian Karl Ludvig Reichelt (1877-1952), whose books became better known because they were translated into English. Reichelt also founded the Christian Mission to the Buddhists first in China and then moved to Hong Kong. When Reichelt died, he was buried at the Tao Fong Shan cemetry.

I must spend more time to understand this history better.
Posted by Kwok Pui Lan at 4:10 AM
Email ThisBlogThis!Share to TwitterShare to FacebookShare to Pinterest
Newer Post Older Post Home