The Silver Bible and Other Surprises 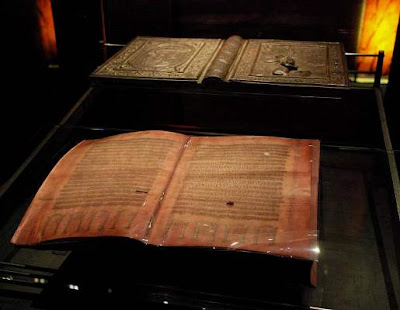 The most treasured book in Uppsala is the sixth-century Silver Bible (Codex Argenteus).

While I have seen other handwritten
and beautifully decorated medieval Bibles in Europe, this is the first time I saw a codex dated back to the sixth century.

The Silver Bible contained the manuscript of the Gothic translation of the four Gospels in Greek in the fourth century. It was written in silver and in gold, and probably for the Ostrogothic king Theodoric the Great. The Goths were nominally Arians.

In addition to seeing the Silver Bible, Uppsala has many surprises for me. Let me begin with breakfast. I ate breakfast this morning in the hotel. It consisted of bread, cheese, egg, different cold cuts, cereal, veggie salad. Conspiciously absent were the sweet things in American breakfast: pancakes and muffins. There were also large jars of almonds, flax seeds, and walnuts.

The other surprise was which way to open the door. After I brought my luggage to my room, I tried to get out. I couldn't open the door and thought I was locked. I was pulling the door inside the room. But it should be pushed outside. I have never pushed a hotel door toward the corridor. Then I was never sure whether to push or to pull the doors.

This afternoon I gave a lecture with Powerpoint to the faulty and students of the Faculty of Theology. I asked for a lectern and was told there wasn't any. Surprise, surprise, I was asked to sit down to deliver the lecture, in a classroom in which those at the back could not see me.

I was glad to see my Swedish friends who came to the lecture: Dr. Elisabeh Gerle, an ethicist, Dr. Helene Egnell, author of Other Voices and specialist in gender and interreligious dialogue. My Olso friends Dr. Marianne Bjelland Kartzow and Dr. Anne Hege Grung also attended.

But the most enjoyable surprise was the rehearsal for tomorrow's ceremony. The Master of Ceremony began by saying that he would give a lecture before the actual rehearsal. He really gave the history of the medieval ceremony for 45 mins! It was so entertaining and I laughed so hard that tears were dripping down my face--imagine I had make-up on. . .

The recipients of honorary doctorates in theology were to receive the degrees first. Theology was the oldest faculty and queen of the sciences in the medieval period. The other person who will receive it is Professor Per-Arne Bodin of the University of Stockholm.

He presented a lecture on "At the Bath of the Hole in the Ice: On a Religious Ceremony and the Soviet Tradition." He is a specialist in the Russian Orthodox tradition. He talked about the celebration of the Christ's Baptism in Russia. The congregation would process down to a hole in the ice, often carved in the shape of the cross. After the priest blessed the water, the people would take some home, as it was thought to have healing property. Some even immersed themselves in the icy cold water. The Russian word for winter swimmers, morzj, literally means walrus. He also elaborated how this tradition figured in Chekhov's work and in Russian novels and poetry.

One fellow wrote a novel called The President's Last Love. Putin invited other presidents to take a winter bath in a hole in the ice. The Ukrainian president was able to withstand the cold. But the British Prime Minister and the American President could not. I guess Putin showed his manhood.
Posted by Kwok Pui Lan at 3:49 PM
Email ThisBlogThis!Share to TwitterShare to FacebookShare to Pinterest
Labels: bath, Bible, food, humor, Uppsala
Newer Post Older Post Home