A Gold Ring and a Top Hat 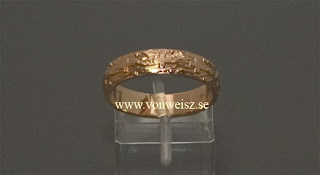 I received an honorary doctorate from Uppsala University this afternoon. I was given a gold ring (with seven crosses). It symbolizes faithfulness toward science and scholarship.

At first I wasn't sure it would be real gold. At Harvard you can order a class ring from the Coop. Needless to say, these class rings are not real gold.

At Uppsala you have to order it from one of the top jewellers in town. It is custom-made and comes in a black elegant leather box.

Yesterday, when I got it from the jeweller, it was a bit small. I had given them size 4.5 American. The jeweller said it might be because my finger had swollen because of the long flight. Today it fits. 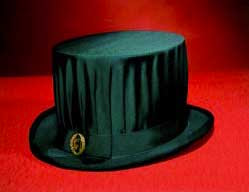 It was the top hat that totally fascinated me.

The Doctor of Theology was meant for men. I was told that they got a hat, a sword, and a gold ring in ancient days.

I had to find a hatter in Boston to have my head measured. I could not easily find one. So I went to Macy's and a hat shop in Boston near the Boston Common. Their hats have sizes small, medium, and large, so it was not very helpful.

The last hatter in Boston Arthur Stephens died in 1990. No one could tell me how to find someone with a conformateur to measure my head. When I saw this conformateur in Google, I realized how uncultured Boston men have become after poor Arthur died. 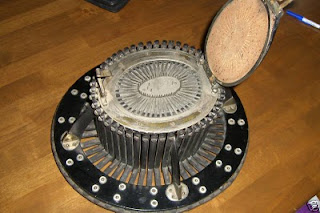 The conformateur measures the shape and the size of head, since the head is not exactly round.

The hat symbolizes freedom and power. Only the faculties of Theology, Law, Medicine, and Pharmacy give out a hat, the other faculties give out a laurel-crown. I was glad that I got a hat, since the laurel will not last. They are made of real leaves.

The ceremony lasted about two and a half hour. It included a lecture, the conferrment of doctorates, and music. The canon outside the building saluted each of the honorary doctorates. The ceremony was very formal, and only the Finns and the Swedes still keep the tradition.

We had to bow to the Vice-Chancellor and other dignitories after we received our diploma. The trick was to keep the hat on the head when you did so. Instead of bowing, I did a curtsy.

In the evening we had a festive banquet in a castle, where the king in the fifteenth cenury entertained his guests. It was almost 11 p.m. when I left, but guests stayed on for the dancing. It was a memorable day.
Posted by Kwok Pui Lan at 6:26 PM
Email ThisBlogThis!Share to TwitterShare to FacebookShare to Pinterest
Newer Post Older Post Home