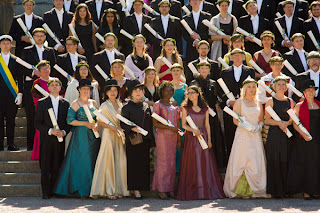 The canon fired at 7 a.m. this morning to salute the young doctors and the honorary doctors.

The Cathedral bell rang at 8 a.m.

Uppsala Uiversity was founded in 1477, and the first graduates received their degrees in the 1480s. Classes were suspended during the turbulent years of the Reformation.

The first Doctor of Theology was conferred in 1617, since then the Swedish king could appoint the doctors. This was changed in the modern period.

The first woman to receive a Doctor of Theology was in 1968.

The medieval ceremony will last for three hours, men in tails and white bow ties, women in long gowns. There will be a formal banquet in a castle afterward. The Nobel prize banquet models after the festivities of this one.

You can watch the ceremony of 2009 here.
Posted by Kwok Pui Lan at 2:10 AM
Email ThisBlogThis!Share to TwitterShare to FacebookShare to Pinterest
Newer Post Older Post Home