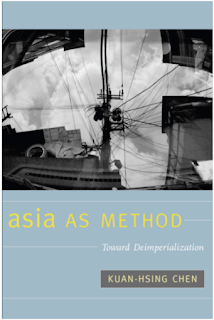 Tonight I am leaving for Sweden to receive an honorary doctorate on Jan. 28 from Uppsala University. It is a great honor to be recongized by such an esteemed educational institution.
I was asked to deliver a lecture on "Transnational Political Theology in the Asia-Pacific" and see if you understand the Swedish in this announcement.
In my lecture I want to use the critical de-imperial and postcolonial theory of Taiwanese scholar Chen Kuan-Hsing, whose book Asia as Method is truly groundbreaking.
While we have heard much about cultural studies in the USA and Europe, Chen and his colleagues have been promoting inter-Asia cultural studies.
Based on his social location from Taiwan, he talks about the three phases of postcolonial work in the Asian context: de-colonization, de-Cold War, and de-imperialization.
Chen says that the legacy of colonialism has transfigured the inner structure of the cultural imaginary of both the colonizers and the colonized. Decolonizing the cultural imaginary involves the following: (1) placing colonialism at the center of analysis, (2) revealing hidden Eurocentrism, and (3) emphasyzing the relative autonomy of local history.
The shape of the cultural imaginary in a specific time and space depends on the interaction between the colonial, the historical, and the geographical. Since the nation-state is no longer sufficient to explain the workings of the globalized world, he proposes to focus on geographical spaces to develop a more appropriate understanding of the formerly colonized world in the neoliberal economy.
Instead of constanly talking to the West, he suggests inter-referencing among Asians and peoples of the Third World. Instead of the binary "the West and the rest," he proposes multiple-referencing.
I learned a great deal from his work. Political theology has become a popular subject and most of it has been done with the USA and Europe in mind. I am developing a transnational political theology from Asia-Pacific.