Gutierrez Signed My book “In the Same Option” 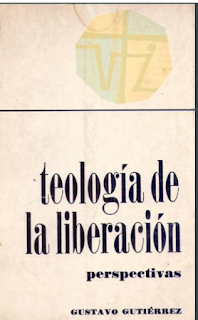 In the 1970s, I was introduced to A Theology of Liberation by my professors when I studied theology in college in Hong Kong. This year marks the fiftieth anniversary of the publication of the Spanish version of the book.

The 1970s was a time of protests among students in many parts of the world. In Hong Kong, students took to the streets to demonstrate against government corruption and colonial rule. Gutierrez’s theology of liberation spoke to the situation much better than the books of those European theologians I read, such as Karl Barth and Paul Tillich.

A Theology of Liberation begins with a critique of the theological enterprise. It offers a new definition of theology as critical reflection of praxis. Reflection cannot exist without praxis. But praxis also needs the aid of critical reflection. The book helps me fathom the vocation of a theologian, because Gutierrez is someone steeped in the Christian theological tradition who cares about the suffering of the non-person.

The 1970s was the period when contextual theology began in Asia. Taiwanese theological educator Shoki Coe coined the term “contextualizing theology.” There was a conscious attempt to develop theology relevant to the socio-political changes happening in many Asian countries. Various Asian theological movements, such as Minjung Theology in South Korea, Homeland Theology in Taiwan, and Theology of Struggle in the Philippines, emerged in the 1970s and 1980s.

Similar to Gutiérrez’s work, Asian contextual theologies began with critical analyses of the socio-political contexts. But except in the Philippines, Asian countries have not been shaped by the Christian tradition. Thus, the kind of living theology emerging from Asia could not rely on the Christian paradigm alone but had to take into consideration religious and cultural elements of Asian peoples. It was eye-opening for me to see that Asian mask dance, poems of dissidents, folk idioms, stories, protest songs, and shamanistic practices found their way into theologizing for the first time.

In An Asian Theology of Liberation, the Sri Lankan theologian Aloysius Pieris writes, “The irruption of the Third World is also the irruption of the non-Christian world. The vast majority of God's poor perceive their ultimate concern and symbolize their struggle for liberation in the idiom of non-Christian religions and cultures.”* Pieris argues that Jesus needs to be baptized not only in Jordan but also in the Ganges and other Asian rivers.

As Latin American theologians paid more attention to popular religiosity and the religious heritages of black and indigenous peoples in the continent, they opened new avenues of dialogue with Asian and African theologians. Gutierrez has also expanded his views on the culture and religiosity of the poor. As Maria Clara Bingemer points out, in the new Brazilian edition of his theology of liberation published in 2000, Gutierrez wrote a long preface and emphasized the importance of dialogue with African and Asian theologies. He acknowledged the fact of religious pluralism and the emergence of interreligious dialogue as challenges of our time.**

Even though Gutierrez’s book emphasizes the preferential option for the poor, there is no analysis about gender and sexuality in the examination of dependence theory and the proposed liberation project. In 1981, Ghanaian theologian Mercy Amba Oduyoye calls the emergence of third world women’s theology “irruption within the irruption.” This irruption has given rise to various women’s theological movements in the two-thirds world. They argue that we need to pay attention to the ways patriarchy intersects with poverty, militarism, gender and sexual violence, and political discrimination.

In the last two decades I have worked in postcolonial theology. What I found missing in A Theology of Liberation is a more nuanced analysis of the subjecthood of the poor and the colonized. Influenced by Marxism, the book has a rather homogenous and flat description of the poor. Many have pointed out that the poor need to be examined through the critical lenses of gender, race, ethnicity, sexuality, and culture. Postcolonial theory opens up a space to interrogate the construction of colonial and postcolonial subject. It asks, what decolonization process would enable a postcolonial or a politically engaged poor subject to be formed.

I also find that the paradigm of liberation theology can be over-determined if it is not open to critique. The paradigm starts with social analysis of oppression—be it class, race, gender, and sexuality—and then Jesus Christ is seen as the liberator of all from suffering and exploitation. Jesus can be seen as identifying with the suffering people or as the savior who intervenes in human history. As the late Marcella Althaus-Reid has pointed out, Gutierrez has included the poor as theological subject, but his theology is still traditional in the sense that it continues to work within the existing paradigm.

As we think about the future of liberation theology, what kind of questions do we need to ask? As we have entered the Anthropocene age, in which human activities have significant impact on the planet's climate and ecosystems, churches and faith communities have important roles to play to transform moral values, change consumerist patterns, advocate policy changes, foster international cooperation, and shape a green culture. Leonardo Boff and other liberation theologians have already linked ecological degradation with liberation. We need to shift our anthropocentric model in theology to a much more complex and expansive planetary model. This means we can't talk about equality, human rights, and social justice, with taking seriously our collective responsibility as humans to the nonhuman species and our roles in the evolutionary processes of the planet.

As a theologian of Chinese background, I also ponder how the rise of China has impacted my response to the book and what kind of future I imagine. When Gutierrez wrote the book, the cold war was raging. Today, we witness a new cold war between China and the US. Much to the chagrin of Gutierrez, his theology will be considered orthodoxy in China for China has been waging a war against Western imperialism for a long time. The change of China from Communism to state capitalism raises the question of what happens after the social revolution?

Today, it is no longer dependency or developmentalism, but the forces of globalization and neoliberal economy that are shaping the world. President Joseph Biden talked to President Xi Jinping of China recently and decoupling between the two biggest economies in the world will not be easy. We need to think about political theology in Asia Pacific that takes into consideration the contestation of two empires with different cultural, religious, and political outlooks. This comparative political theology needs to look beyond Western Christianity to widen its critique of religious and political ideologies shaping world politics. 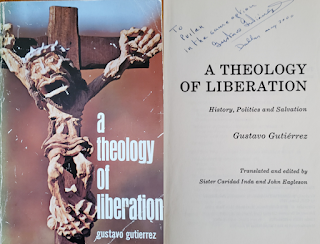 For fifty years, A Theology of Liberation has challenged us to think about the nature and scope of theology and the vocation of a theologian. This challenge remains. I brought my copy of A Theology of Liberation across the Pacific when I moved. In 2000 when I met Gutierrez while speaking at a conference in honor of him, he signed my book “To Pui Lan, In the same option.” It was in reading Gutierrez’s work in college that I became who I am as a theologian today. And I know doing theology is a commitment and a vocation.

(Adapted from a presentation at the session “Fifty Years of Teología de la Liberación—Examining Gustavo Gutiérrez’s Influence and the Task of the Liberation of Theology,” at the annual meeting of the American Academy of Religion, November 19, 2021)