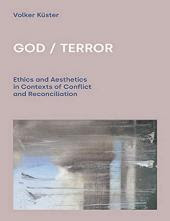 What is the significance of discussing Volker Kuster’s book God /Terror: Ethics and Aesthetics in Contexts of Conflict and Reconciliation today on the twentieth anniversary of 9/11? For me the significance is that we gather to remember, to make sense, and to search for meaning.
Two unforgettable images stand out for me on this day. One was people jumping to their death from the Twin Towers on 9/11. The image elicited the feeling of terror and horror. The second image was the image of two children I saw on TV, a boy and a girl, at the Kabal airport last August, waiting and not knowing what would happen to them and their families in the US evacuation from Afghanistan. I saw terror and horror in their eyes.

On this twentieth anniversary, what have we learned as the human community? What have we not learned? How might we learn anew and again? Kuster’s book helps us to remember, to look forward by looking back.

The book records Kuster’s intense dialogues with artists—painters, installers of memorials and museums, novelists, and writers—to search for meaning and to search for what is possible.

For indeed when language reaches its limits, when we are at a loss of words, we turn to the artists among us. When theodicy seems to fail, when all sorts of theological gymnastics seem to lack the power to explain, to make sense, we ask those who can see, who can still feel, who can come up with shattering beauty in the midst of terror to guide us.

With numerous images, Kuster’s book is divided into two parts. The first part is “Terror, War and Violence: God Talk in the Memory of 9/11.” The second part is “Guilt, Reconciliation, Grace: God Talk in the Political Conflicts in Germany, South Korea, and South Africa.” The second part is a contrapuntal reading of the first part. The first part has a section on the “conflicting images of God”; the second juxtaposes this with “in conflict with God.” This juxtaposition reminds us of the fact that God/Terror is not only found in one locale, in 9/11, but also in pivotal moments in other histories and timelines.

The book has some of the most striking images depicting terror and horror, the absurdity of life, and tragic memories of history. The aesthetics in the book deconstructs the classical understanding of aesthetics as the study of beauty and taste. Rather, as Volker writes, “The strenuous reconstruction of the relation between aesthetic and ethics is not about an aesthetization of suffering in the sense of its glorification but about its disclosure, its treatment and the preservation of memory” (p. 73).

The book raises the question of how we can bring art in dialogue with Christian theology. Kuster challenges the boundary between the secular and the sacred. He discerns religious meanings in “secular” art and culture. The artworks in the book reveal life and death. Christianity talks about suffering, healing, reconciliation, the cross, and resurrection.

But we have to avoid superimposing a Christian framework on art. We need to ask, How might art reveal and challenge us to think about and reconstruct Christian symbols in new ways.

I want to use two paintings in the book to illustrate. The South Korean artist Hong Song-Dam (b. 1955) depicts a woman’s violated body in a pool of blood in a woodcut titled “Blood and Tears 7.” Women were raped and brutally killed during the Kwangju massacre in 1980. The image of the suffering woman’s body requires us to think about why Christianity has focused on male suffering to the neglect of women’s suffering.

The other image is from Hong’s oil paintings in the series “The Twenty Days in Water” (8 pieces, 1999). The series depicts the agony of a political prisoner who is tortured. The torturers tie him on a chair and presses his head under water. The following painting portrays his close to death experience: imagining that he has grown fins and swims with a fish forming like a yin-yang symbol. While Christians have talked about resurrection, this artwork offers another idea: metamorphosis. How might metamorphosis challenge or supplement our understanding of resurrection?