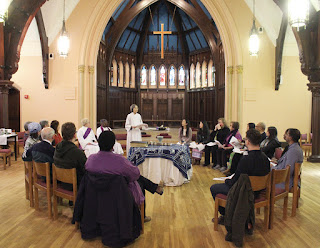 What would a postcolonial Eucharist look like? How would it break down the hierarchal setup of traditional Eucharistic services? How would we use the sacred space? What would we use for the hymns? What should be the preaching style?
Today at the St. John’s Chapel at the Episcopal Divinity School (EDS), we had the opportunity to try out a Eucharistic liturgy written by Dr. Michael N. Jagessar, the former Moderator of the United Reformed Church in the United Kingdom.
Dr. Jagessar was one of the speakers at the “Challenging the Church: Postcolonial Practice of Ministry” conference held at EDS in November, 2014. In his presentation on postcolonial liturgy, he referenced a liturgy that he has written. After the conference, we had many requests to have a copy of the liturgy and it was posted on the school’s website.
The invitation of the liturgy says, “Welcome to the table with no corners. LOVE calls us—friend or stranger, saint or sinner. God’s table is the meeting place of generosity and abundance.” To honor this, we used a round table as the altar. The Bible and the bread and wine were carried and placed on the round table during the singing of the first hymn. As we sat in a circle surrounding the altar, we were reminded of Letty M. Russell’s vision of the church in the round.
When I tried to find an image of the Last Supper with a round table for the service bulletin, I found out it was not an easy task, for most of the images have a rectangular table. Fortunately I was able to find one painted by the well-known Japanese artist Sadeo Watanabe (1913-1996). 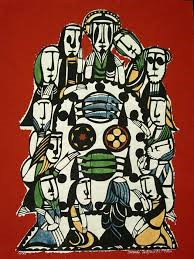 We opened the service with Fred Kaan’s hymn:
The church is like a round table, a table that is round.
It has no sides or corners, no first or last, no honours;
Here people are in oneness and love together bound.
We included a Japanese hymn* with a Japanese student singing the first verse, and all joined for the following verses. Two students from Burma sang a beautiful hymn from their country, “Jesus Is My Friend.” The closing hymn was a Chinese hymn of blessing.
The scriptural readings were read by a Malaysian student in Malay and a student from the Bahamas in Portuguese. The Lord’s Prayer was recited in participants’ mother tongues.
Instead of a sermon from the pulpit, the liturgy called for a “table conversation” following the scriptural readings. The assumption was that all have truth and wisdom to share to benefit the whole Body of God. We divided into groups of two and three to have these table conversations. After the small group discussion, we invited participants to share insights with the whole group.
During the Communion, we passed the bread and wine among the people sitting in a circle. The Communion hymn was one of my favorites: “My God, And Is Thy Table Spread.”
My God, Thou table is now spread,
Thy cup with love doth overflow;
Be all your children thither led,
And let them thy sweet mercy know.
Michael Jagessar’s presentation at the EDS conference provided a theological rationale for his liturgy of the round table. He has further developed it as a chapter of the book Postcolonial Practice of Ministry coedited by former EDS professor Stephen Burns and me. Jagessar situates the Eucharist in the cultural discourse of eating, drinking, and table habits, and in such a way connects Eucharist with what we do in our daily lives and in community. He uses the metaphor of Pelau, a Trinidad meal with mixed ingredients that can be cooked in different ethnic styles, and invites us to rethink Eucharist as an open table that welcomes ambiguity, creolization, and the encounter of multiple identities. 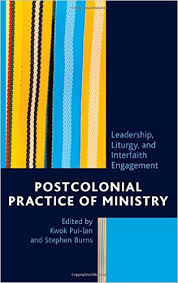 When examining different Eucharistic theologies, he asks us to ponder what kind of table habits—rules of eating and drinking and conversations—are encouraged. Colonial table habits tend to reinforce the colonial class structure, such that those on the lower rung of society would be excluded or made to feel unwelcome. In contrast, Jagessar points out that Jesus’ table ministry welcomed all kinds of people, pushed social hierarchy and boundaries, and created new spaces in the interest of God’s kingdom. In our postcolonial world in which cultures collide and peoples comingle, the Eucharist should not be a ritual to safeguard doctrinal and cultural purity, but a symbolic act that welcomes hybridity, difference, and liminality.


Jagessar also finds the metaphor of the third or in-between space helpful in understanding the mystery of the sacrament of Eucharist. In the exchange in the in-between space of the table, he says, the spirit is at work “to produce mutual inconveniencing, transformation, and new creation with regard to identities and belonging.”


I hope the church will be bold enough to try out different styles of postcolonial Eucharist because the postcolonial church is not a cozy and secure place reinforcing the status quo and what we already know. It is a messy, in-between space such that God’s grace, beyond human understanding, can be made known.**

* The Japanese hymn was "Sekai no tomo to te tsunagi!" (Here, O Lord, Your Servants Gather) and the English version can be found in many hymnals.