Running for the President of the American Academy of Religion 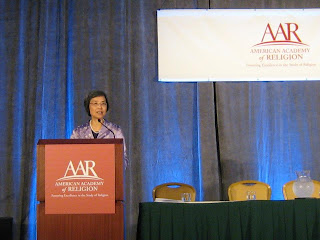 “Pui Lan, would you be willing to run for the Vice-President of AAR?” the chair of the Nominations Committee of the American Academy of Religion (AAR) called and asked me back in April 2008.

The AAR, with 10,000 members, is the world’s largest professional organization of scholars in religion. The majority of its members are from the U.S., but approximately 17 percent are international scholars from over 70 countries.

It was a great honor to have been nominated—for the Vice-President would be in line to become the President in 2011. The problem was that there would be an election and I would have to compete with another candidate, who happened to be a professor at Harvard University.

That spring Hillary Clinton was competing with Barack Obama to be the nominee for the Democratic Party. She lost to Obama in the Iowa caucus and fought back tears after being asked how she kept going in New Hampshire.

Although I was rooting for Obama, I was deeply impressed by Clinton’s courage to face defeat after defeat so publicly.

I asked myself, “If Clinton can face losses in such a public way, what do I have to lose?”

Yes, what have I got to lose?

I decided to run for the AAR presidency because I wanted to stand up for others. Even when I was a doctoral student, I was frequently invited to speak in meetings in churches and academia. I would be the lone Asian woman speaking on a panel.

I generally preferred to stand up when speaking so that the audience could see me. Very often after my speech, there would be a soft-spoken, timid Asian female student, who would come up to tell me that she was glad to see me standing and speaking. In the 1980s, an Asian feminist theologian was a rare sight.

So when I received the call, I remembered these Asian women students who once told me they were proud to see an Asian woman standing. When I said yes, I was answering to a larger call in life.

In a Wabash workshop for pre-tenured Asian and Asian American faculty, I said that as leaders, we have to bring the tribe along. Those of us who are pioneers have the responsibility of opening the door a little wider for others to come.

After Hillary lost, she told the misty crowd gathered at Washington’s National Building Museum: “Although we weren’t able to shatter that highest, hardest glass ceiling this time, thanks to you, it’s got about 18 million cracks in it.” She also said, “And the light is shining through like never before, filling us all with the hope and the sure knowledge that the path will be a little easier next time.”


I have received many awards and recognitions in life. The AAR presidency would be like icing on the cake. Like Hillary, I want to make the path a little easier for others next time.

In the 102 years of history of the AAR, only seven or eight racial and ethnic minority scholars have been elected as President. I am the second person of Asian descent to have been elected; the first one was Professor Vasudha Narayanan of the University of Florida, who specializes in Hinduism. She was also the first woman of color to have served in this prestigious position.

Some Asian American scholars and students organized a banquet to honor me on the eve of the AAR annual meeting at San Francisco on November 18. I said to them, “Tomorrow night I will deliver the Presidential Address. I hope that many years later, you will remember that I stood up and spoke from the podium.” I wanted to encourage them to answer the call and accept invitations and challenges that come their way. If I can stand up, they can too.
Posted by Kwok Pui Lan at 10:38 PM
Email ThisBlogThis!Share to TwitterShare to FacebookShare to Pinterest
Labels: AAR, American Academy of Religion, Barack Obama, Hillary Clinton, leadership, politics
Newer Post Older Post Home