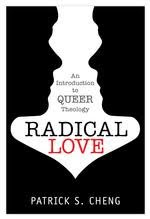 Radical love is “a love so extreme that it dissolves our existing boundaries,” writes my colleague Patrick S. Cheng in his new book Radical Love: An Introduction to Queer Theology.

While queer theory could be highly theoretical and off-putting, Cheng’s Radical Love summarizes the contributions of queer theology in the last fifty years in an accessible and readable way.

So what is “queer”? This term was used in a derogatory way, but has been reappropriated as a neutral or positive term since the late 1980s. Cheng defines “queer” in an inclusive manner: as an umbrella term that refers to lesbian, gay, bisexual, transgender, intersex people and their allies; as a label that embraces transgressive actions against societal norms, with respect to sexuality and gender identity; and as a term used to subvert and erase boundaries especially in queer theory.

After tracing the genealogy of queer theology, the book proceeds to discuss the three persons of the Trinity, following the framework of ancient creeds. God is the sending forth of radical love, Christ can be seen as the recovery of radical love, and the Holy Spirit as the return of radical love.

Following queer, poststructuralist, and postcolonial theorists, Cheng questions the rigid boundaries such as the East and the West, homosexual and heterosexual, male and female, and divine and human. He argues that Christian theology is a queer enterprise, destabilizing all kinds of fixed binary categories.

Queer theologians insist that gender identity and sexuality are social constructs, and these constructs are often deployed to provide sanctions for the status quo. To “queer” is to challenge “common sense” and to render what is hidden, transparent.

For example, the Roman Catholic Church has used Natural Law to justify its arguments in favor of heterosexuality and procreation. But biologist Bruce Bagemihl in his book Biological Exuberance shows that hundreds of animal species engage in homosexual, bisexual, and transgender behavior.

While feminist theologian Rosemary Radford Ruether has questioned, “Can a male savior save women?” queer theologians go a step further to queer the gender and sexual identity of Jesus.

Jesus, as the embodiment of radical love, crosses sexual boundaries. Nancy Wilson and others have shown that Jesus was sexually attracted to both men and women: Mary Magdalene, Lazarus, the beloved disciple in John, and the nude young man in Mark 14:51-52. The late queer theologian Marcella Althaus-Reid portrays a Bi/Christ that challenges our fixation on binaries.

I suspect many readers will find the portrayal of Jesus crossing gender boundaries even more challenging. Virginia Mollenkott writes about the intersex Jesus Christ, that Jesus has two X chromosomes (from Mary), yet phenotypically male. Justin Tanis suggests that Jesus’ life experience parallel that of many transgender people.

Furthermore, Elizabeth Stuart argues that the body of Christ is the church, which consists of a multitude of genders sexualities. Baptism and Eucharist reveal that gender and sexual identities are not of ultimate concern.

The book might remind some readers of the “boundary war” among feminists in the mid-1990s. While feminists such as Marie Fortune argued for clear boundaries in their work against sexual abuses in the church and workplace, Carter Heyward decried that rigid boundaries could also betray us and reinforce hierarchical relationships.

In Cheng’s book, binary distinctions and hierarchical constructs are overcome because of radical love. Sexual abuses and oppressions of all kinds are clearly contradictory to radical love. But love without justice is blind. I would like to see more discussions on how to protect radical love and how to differentiate radical love from love that goes awry, and from abuses that masquerade as love.

One of the strengths of the book is that it touches on all major doctrines of Christian theology: revelation, trinity, creation, sin, atonement, church, saints, sacraments, and eschatology (the last things). It showcases the breadth of the theological output of queer theologians. The book includes further study questions and a lengthy bibliography. It will be a very good resource to be used in the classroom and in church and small groups.

I hope that the publication of Cheng’s book will stimulate more discussions on queer theology among the younger generation, especially among the racial and ethnic minorities. Although Cheng has included racial and ethnic minority authors, their voices are often drown by those of white authors’. I hope that more work will be available that explores the intersectionality of gender, race, class, sexuality in our changing world politics.
Posted by Kwok Pui Lan at 1:54 PM
Email ThisBlogThis!Share to TwitterShare to FacebookShare to Pinterest
Labels: gay, lesbian, Patrick S. Cheng, queer, queer theology, radical love, transgender
Newer Post Older Post Home