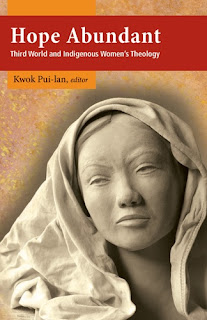 About two and a half years ago I met Susan Perry of Orbis Books at the annual meeting of the American Academy of Religion. I told Sue that the book With Passion and Compassion: Third World Women Doing Theology, one of the first anthologies on Third World women’s theology, was out of date. Since the book’s publication by Orbis Books in 1988, the world has changed so much.

Sue said that she had thought of bringing out a sequel. Unfortunately the original editors Virginia Fabella and Mercy Amba Oduyoye were not able to do so.

I told Sue that I have been teaching a course on Third World feminist theology regularly, and we needed a newer text. Sue asked me if I would be willing to bring out a new volume. I was happy to edit a volume to showcase the works of a newer generation of women theologians from Africa, Asia, Latin America, and Oceania.

I also wanted to include indigenous women’s voices, since their contributions to the global chorus of feminist theology have often been neglected.

and Compassion was based on the first intercontinental conference of the women theologians of the Third World in the city of Oaxtepec, Mexico, in 1986. I was away in the United States doing graduate studies and did not attend the meeting. María Pilar Aquino was kind enough to send me some of the photos she took at the meeting, while I was working on Hope Abundant: Third World and Indigenous Women's Theology. Pilar, Mercy, Virginia, and the other participants looked much younger then.

In 1988, the Asian Women’s Resource Centre for Culture and Theology was formed in Hong Kong. The late Rev. Sun Ai Lee Park from South Korea played a leadership role in the early years of the Centre. The Centre published the journal In God’s Image and many other books on Asian women’s theology. It is now located in Yogyakarta, Indonesia.

The Con-spirando Collective in Santiago, Chile, formed in 1991, provided an avenue for Latin American women to work together and they have devoted their energy to ecofeminist issues. The Collective published a journal Con-spirando.

During my travels in Asia and in the ecumenical circles, I have gathered a lot of materials from Third World women. It was more demanding to find materials from Latin America since the works needed to have been translated. I was fortunate to be able to rely on colleagues such as María Pilar Aquino and Nancy Bedford for suggestions.

I gathered indigenous and tribal women’s theology from India, Philippines, New Zealand, Australia, Palestine, and the United States, though not all pieces went into the book because of limited space. I hope that more work from indigenous women will be available in the future.

Earlier today I was so happy to receive the news that Hope Abundant was awarded second place in the category of Gender Issues by the Catholic Press Association. These awards are presented each year at the Association’s annual convention.

The citation reads: “This is an important book that gathers a new generation of women theologians from Africa, Asia, Oceania, and Latin America into the global theological conversation. Filled with powerful, moving insights from both Protestant and Catholic perspectives, the eighteen contributors explore everything from why the exodus story is a story of liberation for some and a story that justifies occupation and genocide for others to how Catholic women in the Philippines are using women’s mystical tradition and new liturgies and symbols to sustain their work for justice. These are faith-filled theological reflections that offer abundant hope in the midst of poverty, violence, oppression, and war.”

I am very grateful for the recognition and I hope that the award will bring wider publicity for the volume. Proceeds from the book will be used to support the Institute of Women in Religion and Culture at Trinity Theological College in Accra, Ghana, founded by Mercy for training African women leaders. I urge you to support their work by buying a copy of this very exciting volume and please visit the Web site for the book at http://HopeAbundant.org.
Posted by Kwok Pui Lan at 9:08 PM
Email ThisBlogThis!Share to TwitterShare to FacebookShare to Pinterest
Labels: Africa, Asia-Pacific, feminist theology, hope abundant, indigenous, Latin America, third world
Newer Post Older Post Home