The Song of Songs in Three Languages

The Song of Songs is considered one of the most beautiful love poems of all time. For centuries, it has inspired painters, composers, singers, and writers because of its expansive imageries and its dramatic glorification of carnal love. Yet, in Christian worship, we have seldom been exposed to the love poetry of the Bible.

In the past several days, I have had very moving and captivating experience with the Song of Songs. Last week, in my course on Eros, Sexuality, and the Spirit, I introduced the Song of Songs and talked about the interlace between sacred and carnal desire and longing.

The word "poetry" comes from Greek term poiesis, which means forming or making. It is an art form in which language is used for its aesthetic and evocative qualities.

For love is as strong as death,
jealousy is cruel as hell;
the lights thereof are lights of fire and flames (8:6)

The sound and cadence of a poem are as important as the meaning of it. To help students appreciate the Song of Songs in Hebrew, I asked the students to listen to Roy White’s recitation of the Song in Sephardic Cantillation manner on YouTube.

Then I asked a male and a female student to recite part of the Song from Marcia Falk’s translation. A poet and a painter, Falk has worked on the Song for many years and her translation combines rigorous scholarship with poetic sensibilities. She tries to capture the full force of female eroticism in this only book in the Bible in which women speak more than half t 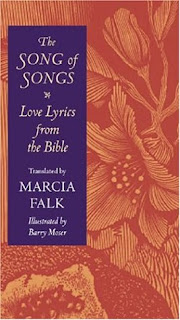 “The song expresses mutuality and balances between the sexes, along with an absence of stereotyped notions of masculine and feminine behavior and characteristics,” Falk writes.

Last Saturday, some of my students and I attended the Boston Pride Interfaith Service. The reading from Tanach was taken from Song of Songs 8:1-7. It was first read in Hebrew and then in English. The Rev. Liz Walker, an award-winning television journalist and anchor, spoke of the excessiveness of love in her sermon.

My feast of the Song of Songs continued on, when I went to the Jordan Hall in Boston to listen to Les Voix Baroques from Montreal singing Canticum Canticorum (The Song of Songs) in Latin. I have almost missed this if not for a student telling me that the Boston Early Music Festival is taking place this week.

The program included songs by Roland de Lassus (ca 1532-1594), Heinrich Schütz (1585-1672), and Marin Marais (1656-1728). The music captured the different kinds of voices in the Song: female, male, and a group. Director Stephen Stubbs played the lute and it was wonderful to see his body expand and contract as he played the instrument. I had the feeling that his body was a part of the music. Anyone who has watched Yo-Yo Ma play understands what this feeling is like.

The Jewish people began to interpret Song as a symbolic text describing the love between Yahweh and the people of Israel from the first centuries of our era. Around 400, when St. Jerome translated the text into Latin, Christians had taken the Song to mean the love between Christ and the Church, following the allegorical method.

(A bundle of myrrh is my well-beloved Christ unto me,
He shall lie betwixt my breasts.)

The Hebrew Song does not mention God or religion, and of course nowhere does it refer to Christ!

The evening concluded with an English song, “My beloved spake,” by Henry Purcell (1659-1695), a baroque composer, considered to be one of the greatest English composers.

My beloved spake, and said unto me,
Rise, my love, my fair one, and come away.
For lo, the winter is past, the rain is over and gone;
The flowers appear upon the earth;
And the time of the singing of birds is come,
Alleluia. (2:10-12)
Posted by Kwok Pui Lan at 9:30 AM
Email ThisBlogThis!Share to TwitterShare to FacebookShare to Pinterest
Labels: eros, Hebrew, love poetry, Marcia Falk, song of songs
Newer Post Older Post Home