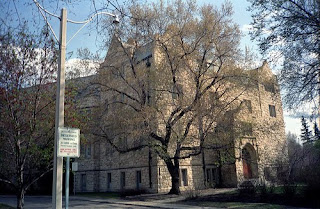 St. Andrew’s College in Saskatoon, Canada, invited me to be their speaker for their Winter Refresher 2011. St. Andrew’s is a theological school of the United Church of Canada, formed in 1925 by the amalgamation of the Methodist, Congregationalist, and Presbyterians. The Winter Refresher brought alumni, clergy, and lay leaders together for three days of worship, lectures, and discussions.

St. Andrew’s has a special place in my heart because my first theology professor Dr. Paul Newman became a professor of theology at St. Andrew’s after he returned from Hong Kong as a missionary.

I have never been to Saskatoon before and I know that it is cold. When I left Boston, the temperature was 27 degree (F). I checked the weather forecast for Saskatoon, and saw the temperature would drop to -17 degree (F) at night during my stay! Though the weather was harsh and unwelcoming, the warm hospitality of the people at St. Andrew’s made my visit very enjoyable.

Canada is a settler country and postcolonial conversations center on the painful history between the white settlers and the First Nation peoples. The First Nations’ peoples make up about 2.23% of the Canadian population.

The United Church of Canada, a progressive denomination in Canada, has apologized to the First Nations’ peoples for the church’s role in imposing European values. In 1998, the Church apologized for its complicity in the Indian residential schools system. The residential schools separated children from their families and many cases of sexual and physical abuse occurred in these schools.

In a panel during the Winter Refresher, Professor Geraldine Balzer of the University of Saskatchewan spoke about the importance of narratives in shaping our identity. She urged Canadians to revisit and re-tell their stories of origin and to recognize the sense of loss of the people of the First Nations. In recent years, First Nations peoples have moved to reclaim some of the indigenous names of their places. Geography and land shape their culture and sense of belonging.

The United Church of Canada in the last decade has expressed great concern over the impact of Empire and economic globalization. The report “Living Faithfully in the Midst of Empire” in 2006 analyzed the complicity of the church in empire and called the church to repentance and action. From 2009 to 2011, the church’s mission theme is “Living for the Earth: Choosing Creation over Empire.”

I had the opportunity of meeting some of the students who had studied my work. Some of them are preparing for diaconal ministry in the church. They are trained in Christian education and ministry for justice. We discussed issues such as hermeneutics of suspicion, interfaith dialogue, the emergent church, Christian identity in the modern world, the politics of multiple identities, and the postcolonial Jesus.

I enjoyed the music and worship and have made many new friends, since people came as far as Victoria and New Brunswick. It was an invigorating experience and I got to know more about the United Church of Canada.
Posted by Kwok Pui Lan at 10:19 AM
Email ThisBlogThis!Share to TwitterShare to FacebookShare to Pinterest
Labels: Canada, empire, First Nations, United Church of Canada
Newer Post Older Post Home