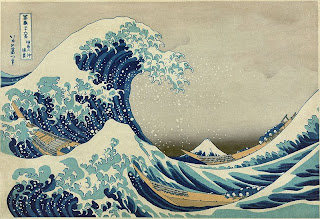 Japan is situated in a major earthquake zone. The country suffers from earthquakes and natural disasters frequently. In 1923, the Great Kanto Earthquake destroyed 70% of Tokyo and 80% of Yokohama. The death toll was 140,000. We have yet to find out the magnitude of the loss of lives and properties in the recent 8.9 magnitude earthquake and tsunami.

I wonder if the precariousness of life is one of the reasons that Japanese artists and poets display such attention and love for nature and its beauty.

The tsunami reminded me of “The Great Wave of Kanagawa” by Katsushika Hokusai, created in the 1820s. This is the first in the series of his woodblock print Thirty-Six Views of Mount Fuji. Although it depicts not a tsunami, but an open big wave of the sea, it captures the power and ferociousness of the water.

The impermanence of nature and beauty features prominently in Japanese art: ikebana (生け花 living flowers or the way of flowers), tea ceremony, and poetry.

One of the Japanese poetic forms is haiku (俳句), consisting of 17 moras, in 3 phrases of 5-7-5 moras respectively. The moras are not the equivalent of syllables, but English writers use syllables as their guide. Traditional haiku focused on aspects of the natural world.

old pond . . .
a frog leaps in
water’s sound
After the tsunami last week, people wrote haiku and circulated on the Internet to express their feelings and to remember the dead. Here are a couple of them and some are taking poetic license to change the form.
Enraged Pacific
Fire, water, endless destruction
Hope and hopelessness collide
(Nohea)
Big tsunami wave
Washing over everything
Wish it wasn't there
(Alexander Hopkins)
Unanchored ships
Tossed in chaos of
Tsunami’s raw power
(Walterrean Salley)
Posted by Kwok Pui Lan at 4:53 PM
Email ThisBlogThis!Share to TwitterShare to FacebookShare to Pinterest
Labels: earthquake, Hokusai, Japan, Japanese art, nature, poetry, tsunami
Newer Post Older Post Home