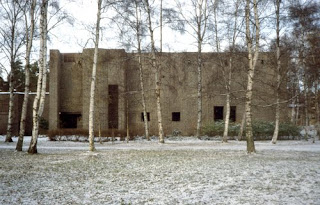 I went to the baptism of Ingrid, the six-month girl of a friend of Dr. Ann-Cathrin Jarl and Rev. Cia Wadstein, this morning at St. Mark's Church in Stockholm. Ingrid was conceived by artificial insemination for her parents are a lesbian couple.
I have not been to a baptism of the Church of Sweden and when Cia said that she would be the celebrant I was glad to go along.
The church outside is very plain looking, but the inside is quite beautiful, in typical simple, artistic northern-European style. The pews are made of very fine carpentry and the kneeling stools are covered by wool. The altar is very simple, with a cross, candles, and vases with flowers. 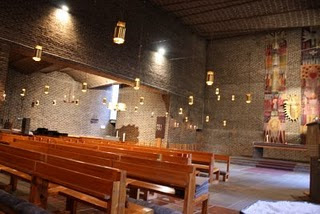 I was surprised that each child has her/his own baptism ceremony, surrounded by relatives, friends, and loved ones. In the U.S. baptism is usually done in a group. The Church of Sweden has confirmation when the child grows up, similar to that of the Anglican Church.
The Church of Sweden is one of the progressive churches in Europe. In 1958 the Church approved the ordination of women and women were first ordained in 1960. Gay men and lesbians then demanded to be fully accepted in the church and sexual orientation has not become an issue for ordination.

When Bishop Eva Brunne was consecrated as the Bishop of Stockholm in 2009, her lesbian identity attracted much international attention. But it was not an issue in the Swedish church.
Sweden allowed for civic partnership of gay men and lesbians in the mid-1990s. When the constitution was changed to allow same-sex marriage in 2008, the church synod approved same-sex marriage to take place in churches in the same year.
After the baptism, Ann-Cathrin and Cia took me to see the old town of Stockholm. We passed by the Cathedral and I fondly remembered that my former dean at Harvard Divinity School Krister Stendahl was the Bishop of Stockholm from 1984-88. He had written a book on Paul's view on women in the 1950s and made a strong case for the equality of women and men.
Sweden is a democratic socialist country and the state provides a lot of services. Education is free and health care is very affordable. You need to pay a co-pay of $20 when you visit the doctor or check in the hospital, but after you have paid $150 for the year, everything is free!
Emma has multiple sclerosis and wanted to come to Ingrid's baptism. She has a personal assistant 7/24 provided by the government. The government also paid for her taxi to come from northern Uppsala to Stockholm, some 40 mins away.
Ingrid's birth-mother has a one-year maternity leave with paid, and the other mother has several months off. Educated and working mothers can thus afford to have 2-3 children.
Sweden has central heating for the city, and garbage is burnt to generate power. It has also a very good recycling system: food for compost, paper and plastic, and bottles.
I am very impressed by the ways the Swedes take care of the sick, old, and marginalized. It this a better society because people think more of the common good?
President Obama has been criticized as a "socialist" and for wanting to change USA into "Europe." Well, the system in Sweden is not bad, and Obama is far from being a socialist.
I asked my hosts why the Swedes have chosen for such a social order. Ann-Cathrin said the Swedes were literate for several hundred years. One had to learn to read the catechism in order to be baptized. Lutheran teachings also inform social morality and influence the social order.
For my Swedish friends, Americans hardly read newspapers and they are not educated by TV programs, which are full of advertisements. Ann-Cathrin called the Tea Party movement a stupidity movement.
Healthcare accounts for about 10% of the Swedish GNP, and the percentage in USA is much higher. Isn't it stupid not to have a public option? Why are Americans supporting the Tea Party, which wants to stop Obamacare. Is it really because of stupidity, I wonder.
Posted by Kwok Pui Lan at 2:52 PM
Email ThisBlogThis!Share to TwitterShare to FacebookShare to Pinterest
Labels: church, health care, Stockholm, Sweden
Newer Post Older Post Home